Heinrich Himmler and the 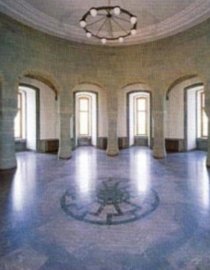 In Alma Valley, a striking 17th-century castle overlooks the picture-postcard scenery that stretches in every direction; jutting majestically above green trees and bathed in sunshine, it looks more like something out of Cinderella than a former Nazi headquarters. And yet the story of is irretrievably intertwined with the insanity and cruelty at the very heart of the Third Reich.

In 1933, SS-Reichsführer Heinrich Himmler, the second most powerful man in , chose the stronghold as the site of a new Nazi Mecca, a place he planned to transform into the very "centre of the world". His efforts to turn this vision into reality would claim the lives of over 1,200 people.

Over the years, Wewelsburg has become a symbol of the alleged Nazi obsession with the occult. Some have claimed that Himmler chose the site because it lies on a nexus of 'ley' energies; others have suggested that bizarre rituals were carried out there by cults within the Nazi party. It has even been alleged that the castle's was such a storehouse of powerful magical energies that all attempts to destroy it at the end of the war were in vain.

While the reality is considerably more mundane than some of these outlandish theories would have us believe, it is ultimately no less bizarre.

There has been much speculation as to whether the Priory of Sion is a shadowy secret society made up of some of the world�s most illustrious figures, a paranoid delusion, or an elaborate (but baseless) hoax. The men and women said to be its Grand Masters are certainly real, most of them key players in science, the arts, and the occult. Yet certain names seem to jump out from the list, seeming at first glance to be so absurdly inappropriate as to cast doubt upon the rest. Two such names would no doubt be those of Leonardo da Vinci and Jean Cocteau. Both Da Vinci and Cocteau were men of genius, and both evinced an interest in the occult/religious matters, but... guardians of the bloodline of Christ?

Thule group a Germanic franchise of the Priory of Sion

There are a few more stunning correspondences that suggest the possibility. First, Himmler�s "Grail castle", the Wewelsberg, can be shown to embody the same pentagonal sacred geometry that is found in the landscape of Rennes-le-Chateau (and elsewhere.) Plans drawn up for the massive construction of a city to have been built around the Wewelsburg would have incorporated the same geometry on a much larger scale. Additional buildings adjacent to the castle would have mimicked the shape of the Spear of Longinus, with the castle as its tip. That this was intentional and not merely some bizarre coincidence can be gleaned from the fact that for a time, the Spear of Longinus was actually kept in the Wewelsberg�s north tower, and was intended to be housed there on a permanent basis after the war. Furthermore, the symbol of the Black Sun, emblazoned on the marble floor of the very same north tower, is not a symbol designed by Heinrich Himmler, but is in fact an emblem used by the Merovingians in early medieval times. Author Nicholas Goodrich-Clarke says that this symbol and its connection to the Merovingians was discussed in a number of scholarly publications during the period of the Third Reich. This is rather amazing, considering the fact that this symbol is said to have represented the esoteric secret doctrine of the S.S., and it can be tangibly linked to the family of the Grail bloodline.

Groups or organizations which use symbols as a means of communication chose their symbols with a very specific intent. The notion that the choice of this sigil was at all arbitrary, accidental or coincidental seems highly unlikely. The stunning confluence of so many ultra-esoteric ideas and symbols seem to permeate this saga on any number of levels. And as examples of these correspondences multiply, it appears possible that the ideological similarities in these groups� worldviews may considerably outweigh any perceived differences.